mysticism with modern science to change your life.

Ingrid Shevlin meets her mind – and a man with a mission

Spending a weekend delving into the mysteries of my brain was far from my idea of fun, but MindLink made me an offer I couldn’t refuse – the tools to get my “mind right”.

Although these are based on research into how the brain functions, Rod Briggs, the mindpower behind MindLink,

takes you beyond science and into a place called “Up”, astronomer Carl Sagan’s description of the non-physical world.

During the workshop Rod takes you on a journey inside your own head.  He teaches you to visualise your own headquarters, a place where you can learn to change negative behaviour, solve problems, set goals and improve your memory.  With this tool you can visualise your dream job, heal yourself and even find a parking place.

It’s all done by accessing and working in an alpha state, a place below beta – the physical world.  Have you ever driven from A to B and not remembered doing it?  Well, that’s an alpha state.  Although you are fully conscious and functioning, alpha is a timeless place of limitless potential and no boundaries.

If it all sounds an odd mix of esotericism and science, it is, because Rod Briggs is, himself, a combination of pragmatism and mysticism.

He’s been having close encounters with a world beyond the physical since he was a small child growing up in a British tenement, a home he wryly describes as “two up, two down

with an outside toilet and a zinc bath”.  When he continued to see, sense and experience all manner of strange events he looked for answers.

When a “dickey lung” forced him off the school playing fields and into a wonderful old library, he was able to begin a journey back into a world of ancient mysticism and mind-power.  It started with Norse mythology, meandered through shamanism and animism, mainstream religion, modern witchcraft and mysticism and martial arts philosophy.  He strayed from the path, mystically speaking, to study for the Anglican priesthood, but now he seems to have found a home in science and spiritual eclecticism.

All this study formed the foundation of Rod’s mind-power techniques, a tool he used initially to make lots of money.  But three years ago he gave up materialism to teach and make a difference to the planet, to take his techniques into schools and prisons.  He says:  “The outer edges of the mind are the inner edges of the universe.”

Already he has impacted on thousands of lives in South Africa and in Ireland.  One of them was Michael, a Durban businessman.

“I’ve read hundreds of books on how to use auto suggestion, but MindLink has helped me achieve goals quicker than anything else.  I also used to get headaches on a daily basis – now I don’t.  I used to take sleeping pills, but I haven’t had one since I took the course.”

But not all, like myself, are without some reservations.  Rick, a cool-headed rationalist, had this to say:  “I found the course amazing.  I fully expected to meet a

group of bongo fairies, but I didn’t.  Rod puts you in touch with a series of pretty established medical facts on how the brain works, which he links with your own personal desire to change your life.  The key behind it all is introducing the practices into your daily living.

“But my criticisms are that the course was advertised as non-intrusive and non-spiritual and it wasn’t entirely.  And I thought the section where we diagnosed other people’s illnesses, inappropriate.  Rod has wonderful tools to teach and he should stick to those.”

As for me, I’m not yet editor, but I’m visualising like crazy.  oh for that salary, that office, those perks……… 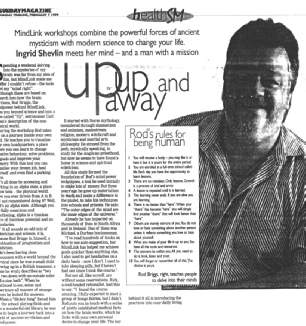