I HAVE always pooh-poohed crystals and auras and other “New Age” things as tomfoolery and the people who indulge as gullible.  But there I was, eyes closed, breathing deeply, imagining colours before heading into a peaceful or happy scene.

The bizarre thing is I wasn’t the only one, and five of us on the weekend Mindlink seminar conducted by Rod Briggs had vastly different reasons for doing so.

I was plunged into doing the seminar, vaguely against my will because it would take up the entire weekend (including the All Black/Bok test at Kings Park) in the interest of pursuing a story.

Having finished a weekend in which we were also exhorted not to drink coffee, eat red meat or drink alcohol, I found myself battling to write this story.

How do I recount the weekend’s events without sounding like a complete loon?

Basically the seminar is about getting in touch with your subconscious alpha brain and letting it solve problems for you.

These brainwaves operate at different cycles.  When in beta there are roughly 14 to 21 cycles a second.

Now the interesting thing is that when you have all those wacky dreams that don’t make any sense – where you are whizzing along in a speedboat one second and are suddenly on roller-skates the next – occur when you are in the alpha mode.  In alpha, anything is possible and there are no three-dimensional restrictions.  Those strange dreams occur when you are in an alpha state and the interesting thing is that you have three to four   dreams a  night,  but  often  don’t remember them. Who hasn’t tried to remember a name – but just hit a complete blank?

“It’ll come to me,” is usually the standard response.  And when you least expect it – like in the middle of a movie three hours later – there it is, that name you couldn’t recall! That’s because your alpha brain has been scouring the memory banks – without you being aware of it – analysing the data to come up with the answer. Although I flipped through the seminar booklet

before my fellow participants arrived, little of it made sense:  memory pegs, going into alpha, the headquarters, finger and thumb technique and so forth.

It was only with the arrival of Rod Briggs and his systematic guidance that you, literally, start to see the light.

Over the course of the weekend he takes you, one step at a time, along a path to greater understanding of the processes of the mind, both conscious and unconscious and how to get the most out of a situation.

Think about golfers.  What do they do when they prepare for a shot?  They take a swing or two, look down the fairway and then get into position.  Simply put, it is visualisation – creating a mental picture of what they are about to do.  The great thing about your alpha mind is that it doesn’t have any concept of barriers.

Your mental picture is your most powerful tool.  “I just hope I don’t make a hash of the presentation to the boss.”  What happens?  Everything that can go wrong does – because you have almost willed it by thinking negatively.

I’m going to land this contract.  It’s the best deal going and the client must realise this.  They’ll benefit and we’ll benefit too.”  Positive thoughts, quiet conviction, knowing it’ll work MAKES it work!

By virtue of being a journalist I am sceptical of most things but try to maintain an open mind.  After doing the seminar I believe there is no such thing as coincidence.  Everything happens for a reason and you can turn situations to your advantage by willing it to happen, thinking positively and visualising a positive outcome.

To explain what is actually done would be counterproductive.  You need to evolve with the class, taking one step at a time.

And no , it wasn’t at all difficult not to drink tea or coffee or alcohol and cut out red meat for the weekend.  And the rugby suddenly didn’t feature all that largely either.  After all, I was given the tools to change my life  -  could the Boks of All Blacks compete with that? 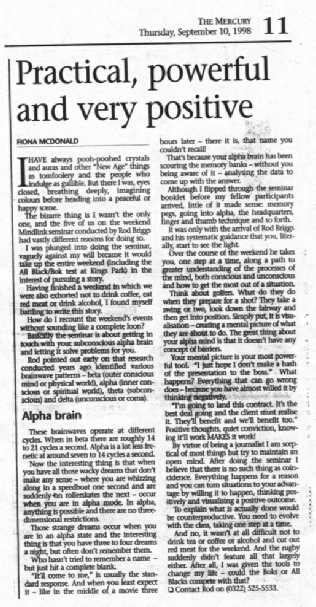